A good way to think of the Industrial Internet of Things (IIoT) is as an ever-expanding tool set to improve your operations. IIoT devices, such as industrial sensors, actuators, motors and controllers, are able to pass along safely and securely vital information that can help your plant run more efficiently and cost effectively.

Additionally, these tools are being designed to work in secure control environments. So, when all is said and done, the rewards derived from IIoT can be huge.

“Instrumentation and control engineers have their hands full figuring out new architectures, protocols, security, etc. to bring the IIoT to a practical reality,” says Steven L. Cook, principal engineer at Cook Process Solutions, LLC. “When they do, we’ll have an enormous amount of data that needs to be managed and processed into intelligible information to make decisions.”

Putting the right information in the hands of owners, operators and engineers will allow decisions and actions to increase efficiency and productivity and lower operating costs.

And IIoT can lend itself to incremental upgrades—as long as your equipment isn’t totally ancient. You don’t necessarily have to throw out everything and start over. So, the rest of this article will take a look at what can be accomplished, what IIoT technologies are necessary and what security technology may need upgrading or changing. 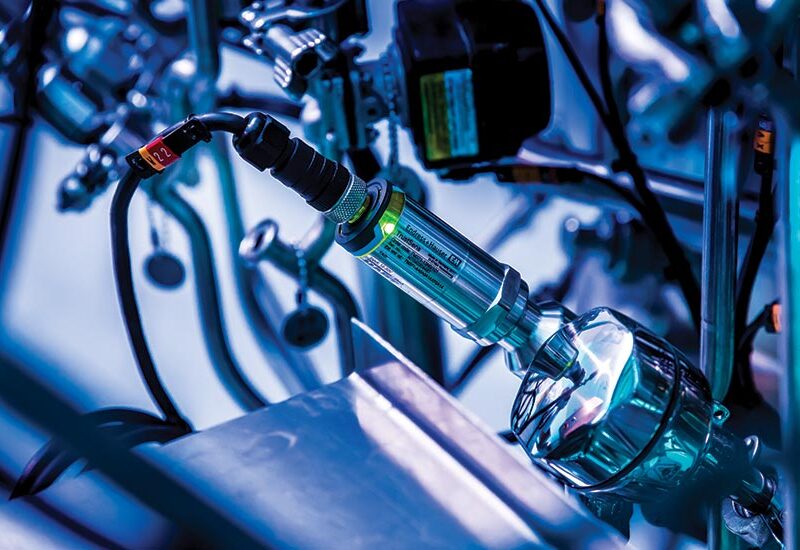 Endress+Hauser’s iTherm TrustSens is a self-calibrating, hygienic temperature sensor for the food and beverage industry. Compliant with FDA and/or GMP regulations, the device provides digital output that can be used in IIoT environments. 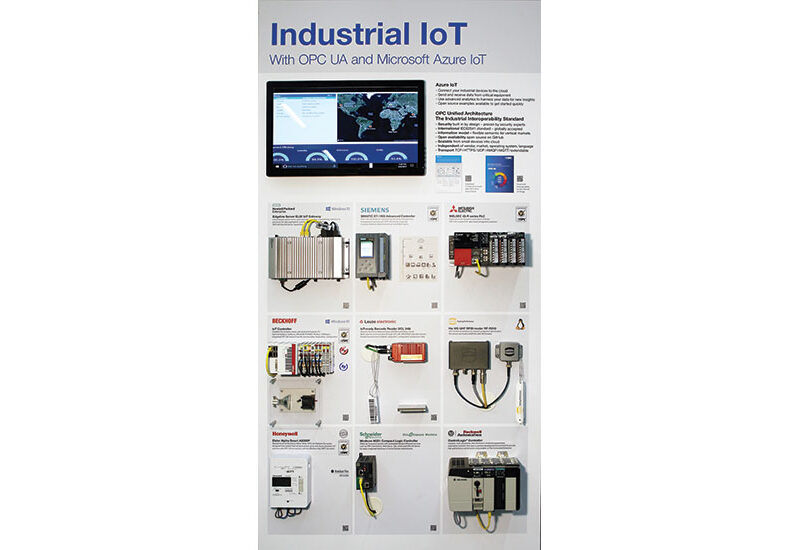 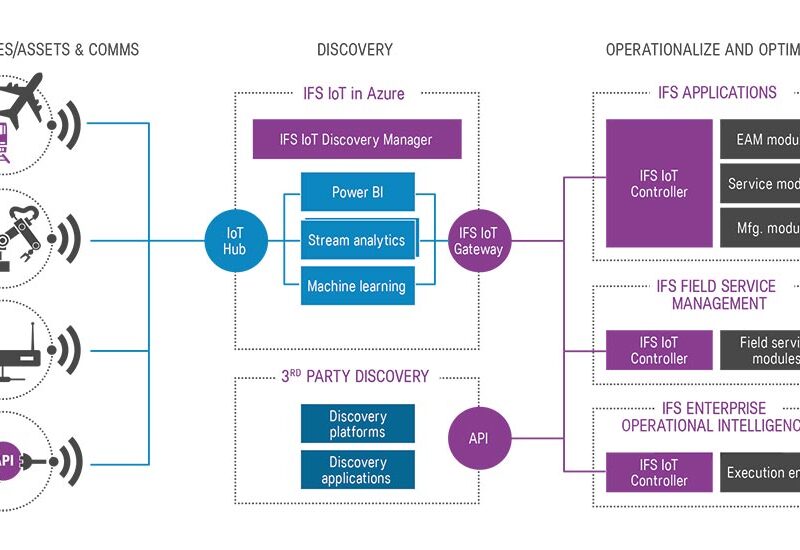 The IFS Business Connector consists of software modules that let users bring in data from devices (for example, a device could be an aircraft composed of many instruments and controls) and sensors, perform analytics and do machine learning in the Discovery module, and then optimize assets, services and manufacturing. 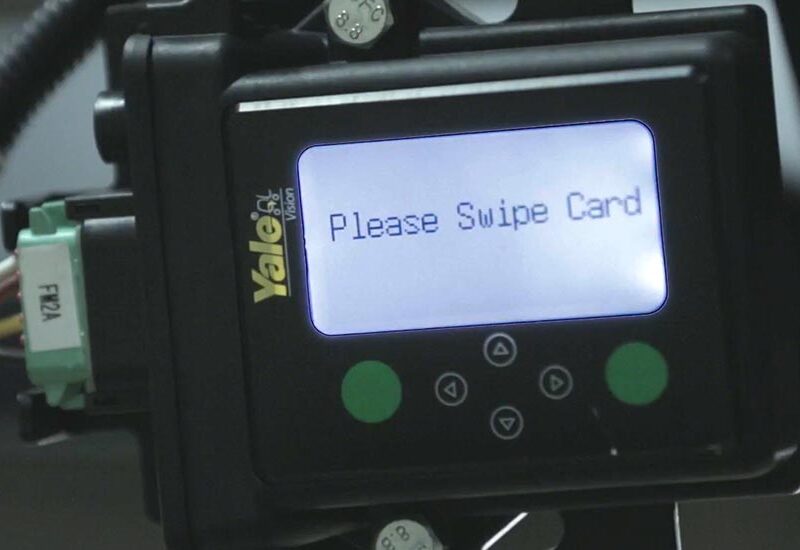 Yale forklift trucks are available with Vision Telemetry, and IIoT system that continually checks important operational parameters and warns of problems before they happen. 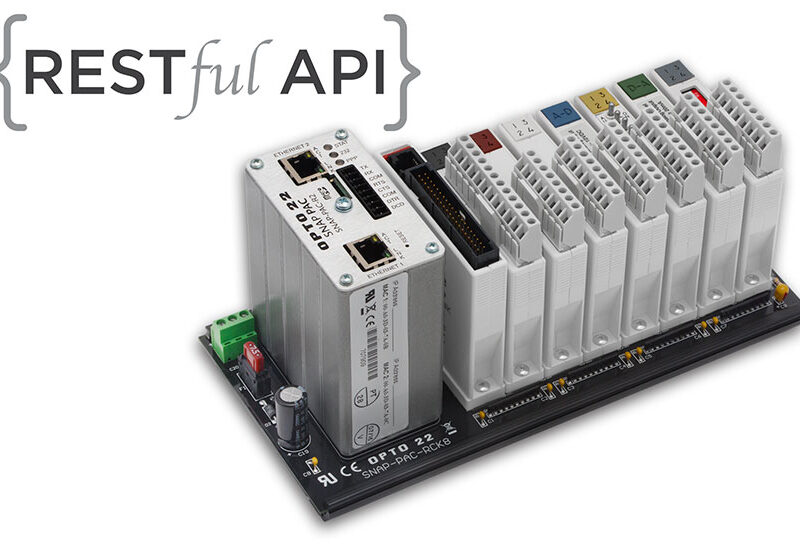 Opto 22 SNAP PAC and I/O convert raw signals into useful digital data, which can be securely accessed through the PAC’s HTTPS server and RESTful API.

IIoT, Industry 4.0 and the cloud are often thrown together to define connected technologies that are capable of pulling in large amounts of data, analyzing it and providing valuable business information, for example, to improve processes, quality or maintenance activities. The cloud can be a misconstrued concept and is likely unique for each application and user, says Opto 22’s Arun Sinha, director, business development.

“Just as there is no single definition or use case of what an IIoT application is, the role of the cloud versus the edge will be different for specific companies,” says Sinha.

The term, “edge,” often refers to a server and/or gateway device that connects from a plant control system or enterprise system to an external system, say on the internet.

“And ‘cloud’ does not necessarily mean a server and storage somewhere outside the company firewall,” adds Sinha.

With an ever-increasing emphasis on the edge or the “fog,” often the cloud can be a “private cloud” within the company firewall and on premises. The role of the cloud can include storage, as well as data cleansing and processing, such as user-defined storage optimization, rules-based data reduction, etc. Analytics is a key element of cloud-based IIoT systems, says Sinha.

Getting started with IIoT

Michael Griffith, program manager, VDC at Stellar helps a variety of clients in the food and beverage industry with their automation needs—from greenfield projects to renovations.

“To be honest, IIoT is a buzzword that can be difficult to define. Most facilities built today are equipped with control technology and smart machines that can communicate with each other, but a renovation can be more difficult,” he says.

Griffith has seen some old plants with just-as-old equipment, and that can pose a problem to IIoT migration.

“Automation equipment is typically as old as the facility itself, so the infrastructure and equipment typically weren’t built with IIoT in mind.”

There may be certain components that can be integrated into a new technology system, but in a facility with 20-plus-year-old technology, most elements won’t play in the IIoT universe. Some equipment suppliers have made it easier to integrate IIoT into their older lines.

How can IIoT help?

IIoT applications take many shapes and forms, but offer several methods to improve operations. For example, Skkynet, a CSIA partner member, offers its Cogent DataHub in-plant software, which is used by food and beverage processors worldwide to collect and share real-time data between different process areas and remote locations.

According to Bob McIlvride, communications manager, the data hub is IIoT ready and can be configured to make secure outbound connections to the company’s SkkyHub cloud service, which acts as a real-time proxy to share data via the cloud. SkkyHub’s system is used by a North American grain distribution company to monitor operations at several locations via the cloud. Data is displayed on SkkyHub’s WebView HMI and logged into a data historian software system at a central location.

What do you do when systems are no longer maintainable? McEnery Automation, a CSIA certified SI, has been working with a large brewer for over two years to implement a standardized operational intelligence system at multiple sites in North America.

A single process historian is used to capture data from various sources—from typical time-series process data, to key data values at a specific point in a process to alarms and events. The brewery is then able to select best-in-class reporting and analytical tools for each specific application, such as packaging line OEE, inventory management and scheduling and PM for motors, valves and events.

What can IIoT do for you?

Over the last 10 years, industry hasn’t kept up, making it difficult to manage performance, especially the performance of industrial assets checked on artificial schedules. Even the price of energy changes every 15 minutes for some manufacturers, so getting control over costs, efficiency and performance is crucial to keeping up with business, adds Boville.

“For those involved in the manufacturing world, IIoT has created an environment where every data source corresponds with an opportunity,” says Sean Barry, MindSphere food and beverage developer US, Siemens.

Previously inaccessible performance data is now readily available and, thus, provides a benchmark to which improvements can be driven. Taking this to the next level, predictive models can be applied to anticipate equipment or product failure to enable proactive maintenance.

IFS has released a set of software modules, called IoT Business Connector, and its architecture is crafted to take data from IIoT sources (devices/assets) and use it to improve business processes.

“Organizations follow a simple three-step process to change business processes—where the implementation is quick, the learning curve is reduced, and the risks are low,” says Rick Veague, IFS CTO. The system embodies the three basic principles in a well-configured IIoT business optimization process:

Behind the scenes, one communications technology that makes the IIoT and IoT work is a protocol called MQTT. Developed in 1999 for the monitoring of an oil pipeline through the desert, the protocol was designed to not be “chatty” (unlike Ethernet and HTTP) and to use little energy, as sensors in the field were battery or solar-powered and communicated with satellites. Another similar protocol in use today is OPC UA, which was originally designed for communications from devices/sensors to Microsoft Windows-based servers.

MQTT is the leading protocol for IIoT, says Travis Cox, Inductive Automation co-director of sales engineering. The company-configurable automation system, Ignition, has full support for MQTT and can convert legacy devices to the new architecture by publishing that data through MQTT. Ignition can also subscribe to an MQTT server.

What are the benefits of MQTT? Cox lists 10, which can be found in the box, “MQTT brings benefits to IIoT communications.” But most importantly, MQTT decouples devices from applications, and it requires low system bandwidth, so an organization can get more data from the edge of the network. The decoupling is important, as it means devices no longer have to be connected to applications, which puts a limit on innovation.

“Instead, we connect devices to infrastructure,” adds Cox.

The role of sensors and devices

Current technology allows collection from all kinds of digital sensors, but what makes data valuable is how an IIoT system acquires data from on-premises facilities, says Kai Wang, IoT solutions architect for NEXCOM/IoT automation solutions business group, a CSIA partner member. An IIoT system should include features for IIoT communications support, IIoT control capability and IIoT HMI, which can bridge the last mile connection gap between cyber and physical worlds and serves a pivotal role in the IIoT environment, adds Wang.

In earlier days, most sensors typically measured one process variable and communicated over a 4-20 mA DC loop. Times have changed.

“Sensors now have additional diagnostics for the sensors themselves, as well as additional product/machine data that can be used for analysis and optimization when correlated against other machine data,” says Mike Chen, corporate engineering group manager for Omron North America, a CSIA partner member.

For example, if a photoelectric sensor starts to accumulate residue, which blocks its light, the connected controller can measure this against a warning threshold that triggers an alarm or maintenance work order.

The data you need to collect will depend on the needs of your organization, but typically, that data should have an impact on one or two key areas of your business, e.g., quality or efficiency, says Mike Edgett, Infor industry & solution strategy director, process manufacturing.

“In other words, the data you are collecting is there to help ensure quality as part of your HACCP or FSMA plan, or it is data that is helping you determine the efficiency of your equipment (flow rates, process times, etc.),” he says.

Finally, one last point about security and plant data in an IIoT environment: It is important to keep in mind that cybersecurity is always an issue. In fact, Andrew Ginter’s book, “SCADA Security—What’s Broken and How to Fix It,” says everyone should accept that nothing is 100 percent secure, since all software can be hacked.

“Controlling systems can be secured in multiple layers,” says McCausland.

Most controllers themselves have security mechanisms that can provide access restrictions and user rights. The networks that act as the backbone of the control system can be secured as well.

“In a nutshell, it is essential that a layered zone model (from ISA/IEC-62443 standards) is used,” says Byres.

The mission-critical devices on the plant floor must be hidden behind layers of protection and never talk directly to computers (or iPhones) outside the plant floor. PLCs and devices should send their data upward to data collectors in the plant and then provide the IIoT functionality.

IIoT suppliers and systems integrators have been working with government agencies, such as NIST and DHS, and other professional organizations to make both hardware and software safer from attacks. One organization, the Open Group’s Open Process Automation Forum (OPAF), is focused on developing a standards-based, open, secure, interoperable process control architecture.

The OPAF is a consensus-based group of end users, suppliers, system integrators, standards organizations and academia. It addresses both technical and business issues for process automation.

To read more on this, Kevin Fitzgerald, who represents the OPAF and is also a global solutions architect and Schneider Electric Fellow, discusses IIoT and OPAF’s role in promoting new technologies in an exclusive interview found on FE’s website at “IIoT and the Open Process Automation Forum.”